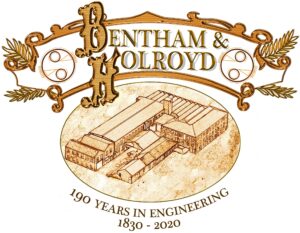 Situated on Albion Street – Silsbridge Lane, now Grattan Road, William Waddington was a manufacturer of wool combs in Bradford the then boom-town of the industrial revolution and wool-capital of the world during the mid-1800’s in a small factory that came to be West End Mills on Richmond Road, Bradford.

Frank Holdsworth Bentham & Wilson Fortune, two young engineers who had already won their laurels as experts working for W.Waddingtons entered into association to buy the business. With a steady expansion of business, now renamed to Fortune & Bentham, the inventive ingenuity of the partners manifested itself by the construction of special machinery to facilitate speedy production and the out-turn of superior goods, manufacturing combing machines, circles and fallers for the textile industry.

Across the road on the corner of Richmond Road and Longside Lane was a larger site where the company could over the years develop West End Works into what would be their base of operations for the next 70 years.

The partnership dissolved with Mr Fortune moving into cycle manufacturing business and F.H. Bentham carrying on with the textile comb making, specialising in the manufacture of the now forgotten Noble Comb and later the French Comb. 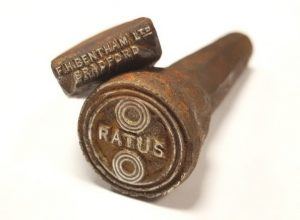 By 1917 the company had grown substantially as F.H.Bentham, expanding to a secondary factory at Hanover Street, Keighley including manufacture of textile brushes.

Then in its infancy as an industry, Benthams branched into the manufacture of buffing rasps, later extended to include complete design and manufacture of other machinery and equipment used in the re-moulding industry.

Still under the direction of the Bentham family, Philip & Frank Bentham, by 1958 the section of the company manufacturing equipment for the tyre re-moulding industry had developed to such an extent that a subsidiary company was formed at the company’s newest quarters in Lane Close Mills until 1960 when BTYM Co finally moved to Dotcliffe Mill in Kelbrook, near Barnoldswick under the title of Benthams Press Division.

Following the realisation of the city’s new ring road scheme through the Richmond Road Site the company made the decision to move to Prospect Works Allerton, a spinning mill originally built in 1850, the second oldest mill in Allerton overlooking Ladyhill Park where the company still resides to this day. Thanks to several developments on the site the new premises would provide three time more work space than at the previously limited West End Works.

Under the new directorship of Kenneth Christie, Ken Hudson, Lyndon Nash & Don Barker, all former employees under the Bentham family, the company bought Moses Holroyd engineering and rebranded as Bentham & Holroyd, further diversifying into the manufacture of critical components in the oil and gas industry.

2020 – COVID & Brexit After celebrating 190 years of UK manufacturing in Bradford, we now see ourselves operating throughout the global Coronavirus Pandemic supplying to essential industries whilst embracing our situation post Brexit, further diversifying our CNC capabilities and with redevelopments to the Prospect Works premises taking us into 2021 and forwards.

It’s been a tough year for us all with Covid19 forcing us to close all but our essential supply chain manufacturing from March through into May. As of 13th May though we are delighted to have been able to reopen our offices and have been bringing back the majority of our furloughed manufacturing staff week…

This website uses cookies for functionality, security, and a better user experience - please click the 'I Agree' button if you're OK with this. You can read more about them here: